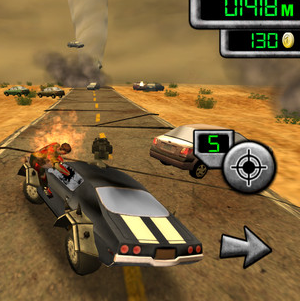 The Last Driver is a zombie apocalypse, driving action game. The idea is to complete levels by avoiding a number of obstacles in your way, but at the same time to kill as many zombies as possible, and collect all the coins available. The concept isn’t a new one, but the game does certainly have more to offer than it appears at first glance.

The levels are somewhat linear in as much as you just drive down a straight piece of road. There are however are a number of varied obstacles in your way. These range from super-zombies throwing boulders, to streams of lava. The variety in obstacles will keep the game interesting, and means you always need to be on the lookout for what is coming next.

There are a number of ways to get around obstacles. If there are zombies in your way, you have a gun mounted above your car which will make short work of them, or if you prefer you can just run them over, which is equally as satisfying when they fly over your windscreen. If the obstacle is more solid you can either manoeuvre around it, or jump over it. There are multiple ways to complete a level, and always having options is a nice feature. 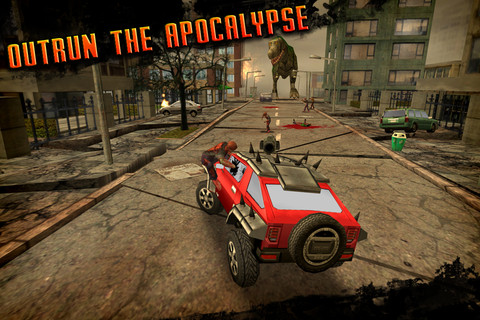 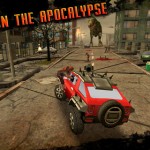 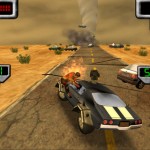 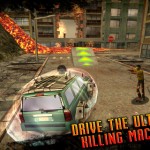 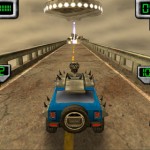 As you progress through the game you gain more and more coins. You can directly pick up coins, as well as being rewarded for completing levels. Coins are used to buy a whole host of upgrades for your car. The upgrades are both cosmetic and effective, as upgrading the gun to a Ray Gun will start to do some serious damage.

As with most games with a currency in the App Store, there is a micro-transaction system. For a small price you can buy a relatively huge amount of coins that will upgrade your car to quite a large extent. There is no need to buy the coins, as you do earn them, but if you want some of the later upgrades it would take a while doing it the old fashioned way.

Overall this is a nicely presented, and fun to play driving game, and the addition of the Zombie twist only adds to the enjoyment you can get from the game.