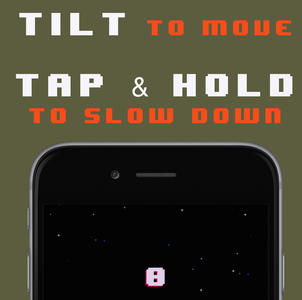 Space Max – An Amazing Adventure is the newest game available on the IOS platform. It is immediately striking for its 80s retro feel, very reminiscent of games on the Atari console of the same era. That means the graphics are basic and blocky which will inevitably turn many people off but the selling point of this game is exactly that – it is the unashamed old school retro vibe that will draw people in. 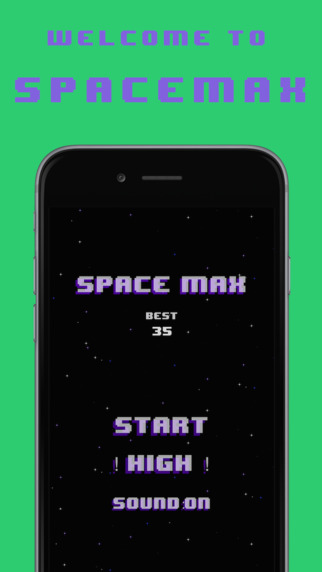 If you played old arcade games, or games on the Atari 2600, this will look and feel very reminiscent of Defender, Galaxian and Space Invaders. Space Max takes its cue from any one these games, and like its 70s and 80s predecessors, relies on gameplay and playability rather than graphics.
The game involves the user controlling what can only be a spaceship (or a satellite?) but the blocky graphics means it’s hard to make out what it actually is. Unlike some of the older games mentioned, it is a vertically scrolling shooter with the action scrolling upwards as the spaceship moves through space. The object of the game is to avoid crashing into obstacles in its path. This is done by tilting your iPad or phone to the left or right to steer and tapping and holding the screen to control the spaceship’s speed. The aim, like all games of this type, is spectacularly simple – it starts and ends with not crashing the spaceship into obstacles. 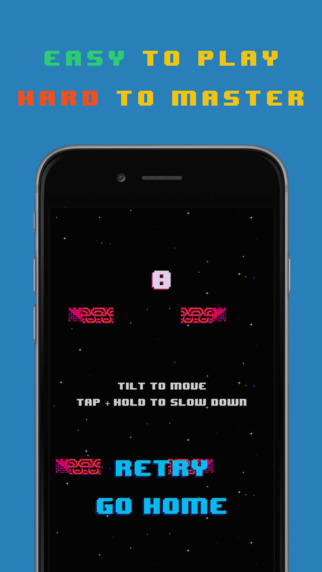 The soundtrack is wonderfully typical of this genre with a kind of 1980s sci-fi, electronic vibe that you would expect to hear in a 1980s thriller like Manhunter.
In terms of gameplay, many players will find this disappointing. Controlling the spaceship is difficult. It involves tilting the screen to control the direction and this to tricky to get the hang of at first because the spaceship is very sensitive to any movement and will often send you careering into an obstacle and consequently to your death. It also requires tapping and holding the screen to control the speed and having to do this in tandem with tilting it makes you think it is slightly too much effort for the very first level. It is very difficult to actually learn how to play this because you get only one life and if you are not familiar with the controls, your spaceship will soon smash into the nearest obstacle and its game over. 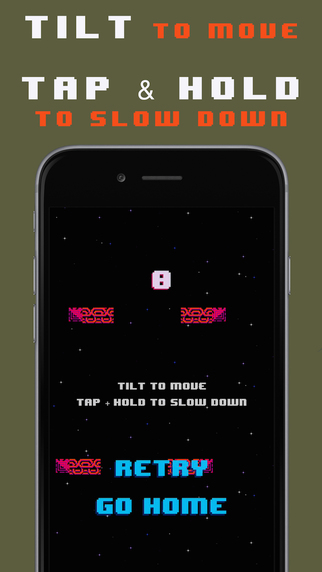 Many users will think the controls are too cumbersome and the speed too quick for this to be enjoyable right off the bat. If you’re downloading a game to your IPhone or IPad, it needs to be simple, and at first, nice and easy. In this sense, the makers of this game have perhaps missed the point of the retro genre: start easy and get harder.

But with free games there is always a tendency to overanalyse. Hard-core retro gamers won’t be able to resist Space Max. The kitsch retro graphics alone will attract some fans and the soundtrack was certainly a nice touch. But the playability straight out the gate is what these games require, especially on handheld devices.