Play Three Defenders Free to know How Far you can go

It is a known fact that the Google play store presents a whole lot of apps and most of them are games either based on physics, puzzle or action. Among these games action games are the most popular ones as they provide a lot of scope to play and if you are good at it you can reach to any height in any action game. One such action game is Three Defenders (Free) which features not one but three central characters. The change in the person you choose from the three will actually change the game and the skill required for it. 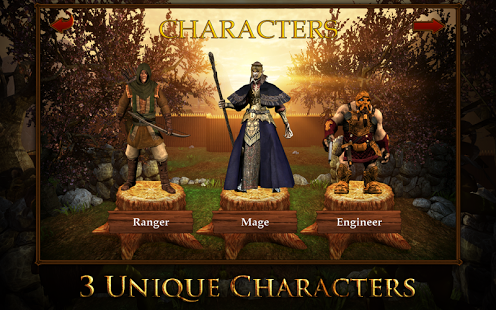 The three defenders in the game are Ranger, Mage and Engineer. Each of them posses a fixed set of skills and the way to play with them is different in every case. While ranger is the most primary castle defender, Mage is the extreme one, and Engineer lies between the two. The three characters are unique. If you are demanding player and you want more interaction with the game, you are going to choose Mage for sure, but try the other two characters in order to know the diversity of the game. You can choose from a number of spells available in the app but you can use only 4 spells during. It is possible to buy upgrades and improve the game. Three Defenders (Free) also has a paid version and it is launched in the market by Solid Games Studio. Summary: Three Defenders (Free) is a castle defense game which has several levels and several environments. The action part of the game is quite good.

Good: The graphics and sound of the game is quite good and the free version gives a great glance of the real game.

Bad: The game has been loved by all and there is nothing bad reported about the game yet.
Paid: https://play.google.com/store/apps/details?id=com.solidgamesstudio.threedefendersn
Free: https://play.google.com/store/apps/details?id=com.solidgamesstudio.threedefendersndemo
Trailer: https://www.youtube.com/watch?v=dxoBK0_SVog