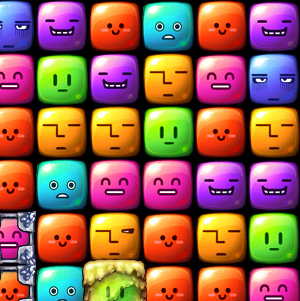 JellyBooomis a classic casual game of a similar style to Tetris or Bejewelled. There isn’t a whole lot of depth, but the gameplay is quick, fun and at times challenging.

The game consists of moving the rows or columns of blocks in order to align three of more of the same colour block. When a row of similar blocks is achieved they are removed from the grid in a burst of light and combo scores. Chaining large sequences together is satisfying and will quickly allow you to progress to the next level due to the various combo multipliers.

The level progression in JellyBooom isn’t anything new and exciting, with each new level just increasing the number of points required to pass, or reducing the time allowed. This mechanic keeps the game feeling exciting, even when you are essentially doing exactly the same thing over and over again.

The ability to rotate the rows as well as the columns is different from other similar games, and provides a lot of alternative, so a lot to think about! It also however means that you are unlikely to become stuck at any point because just randomly swiping will usually result in clearing a few blocks. 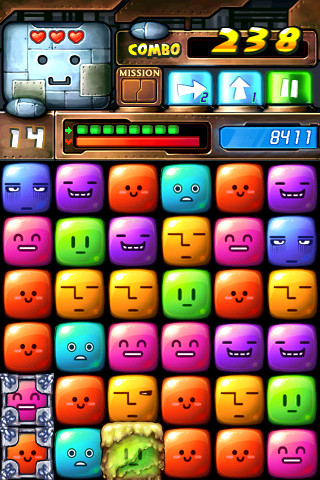 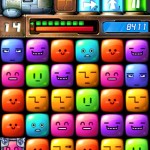 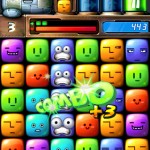 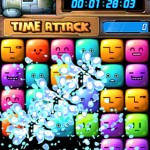 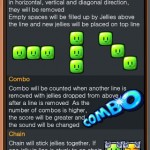 The graphic style of the game is beautifully presented with the blocks having animated faces that change expression when you link them together. The menu system looks blocky and unresponsive, just this is just because of an awkward animation in the background, in reality there is no responsiveness issue. A small, but momentarily worrying issue is that the Facebook connectivity button on the settings screen says ‘logout’ even when you aren’t logged in – but don’t worry, all your friends aren’t finding out about your embarrassingly low scores unless you have logged in!

The ‘lite’ version of the game just contains fewer levels, so it’s worth giving this version a try if you aren’t sure whether or not to buy the full price game.