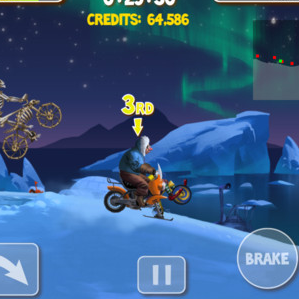 Crazy Bikers 2 is at its core a generic bike racing game with acrobatics. This kind of accelerometer based game was around when the App Store was in its infancy, and remains one of the most popular genres to this day. What this game offers that is slightly different to others is the importance of currency, and the sheer amount of content that is included with the game.

The game itself is good, casual fun. You take control of a unique character (from Egyptian mummies, to Disney style princesses), and ride a pedal bike across a hilly landscape. Along the way you get rewarded for doing acrobatics by gradually filling up an acrobatics meter. When the meter is full, you gain a boost, which will propel you ahead of your competitors. The sort of acrobatics that are in the game are no different from any other similar game, you can do simple backflips and front flips using the accelerometer.

Where the game shines is in the currency system. After every race you earn a certain amount of currency which can be used to unlock new characters, new tracks, boosts and a number of other items. The amount of content in the game is refreshing, and to unlock everything would take real dedication.

Obviously with the amount of content, just racing isn’t going to earn enough currency to unlock all you will want to. This is where the micro-transaction store comes in. For a small fee you can get quite a lot of currency, which will help you on your way to unlocking all the cool things available. 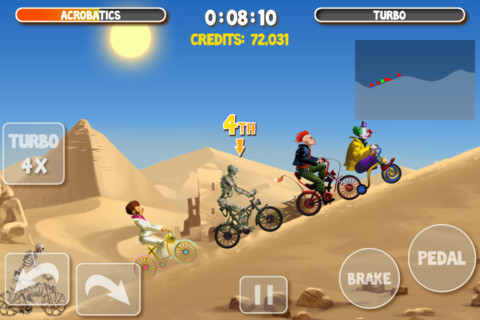 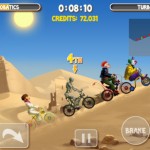 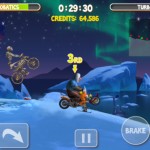 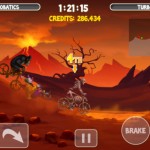 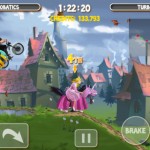 Crazy Bikers 2 is a well presented game with flowing menus and smooth gameplay. The different characters add colour to otherwise dreary maps, and the pedalling animation is well executed. It is a change to see this level of animation, instead of just putting the characters on a motorbike.

There is Game Center integration included in the app, so you can race against one other of your friends – this is a fun way to show off all the stuff you have unlocked, as well as just being a good way to waste some time.

Overall this game doesn’t really do anything wrong. It provides you with enough content to last a lifetime, a non-pushy micro-transaction store that you don’t feel required to use, and moderately fun gameplay. For a free app you can’t really expect much more than that!