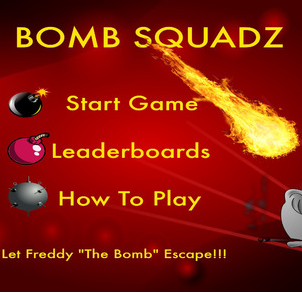 While traditional arcade games revolve around moving and fighting in a single line, the iOS a[p Bomb Squadz emulates the same, extending it to all directions. This breakout style game comes with a highly addictive twist. Freddy is trapped at the centre of a wheel and you have to protect him from the fireballs or bombs using gear hands. It is a test of your presence of mind. 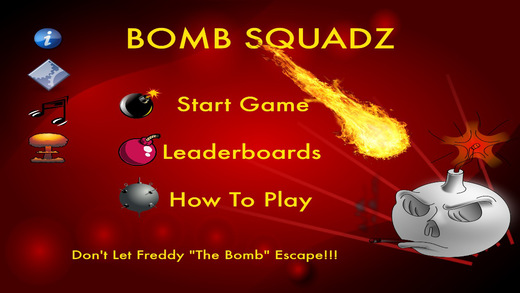 AA Solutionz developed this arcade game with visually stimulating graphics put together with a peppy soundtrack for the iPod Touch, iPhone and the iPad, requiring iOS 5.0 or higher. The numerous bombs around Freddy have to be destroyed in order to protect Freddy. It resembles the classic bubble popping game, but with a new exciting twist. Suited for players of all ages, it is easy to understand and play both. At the same time, it gets more challenging as one proceeds with the game. With balls shooting in at you from all directions, a good amount of concentration is required indeed.

Although the concept itself is quite simple the developers have tried to build up on the features in terms of providing the best of everything. The graphics have been developed very well and the soundtrack sets in the right mood. If you like competition, then you can compete for high scores with yourself and with other players. The Game Center keeps tracks of all the high scores so you know where you stand. 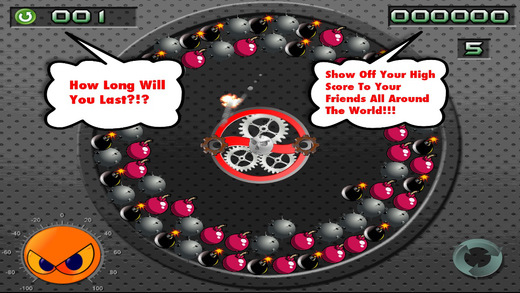 The app is quite complete, in terms of vivid graphics, a hip-hop soundtrack, unique game concept, beautiful HD features and sound effects. The user interface is colourful, bold and easy to use. The screen controls are very user friendly. The players canrotate the wheel to deflect and engage the fireballs. Each game starts off with a single fireball but users are allowed to add up to 3 fireballs using the orange icon at the bottom left corner of the screen. By doing so, the hitting gears begin spinning quickly for a short time.

In each game, Freddy sets out with five lives. Being hit by a fireball costs him a life. Once he exhausts all his five lives, the game ends. As simple as the game might sound, the fun is in earn enough points to create high scores and also score on time. After each game, the app displays the current score, the highest score till data and the least time record. If they wish to share as well as compare their scores with other players, then they can view the Leaderboard from the Main Menu.

Bomb Sqaudz is an interesting game that combines the fun of an arcade game with the fast pace and action of thrill games. It is suitable for people of all ages and kinds. Presently available for free in the App Store, requiring about 27.0 MB of free space and iOS 6.0 or higher, it is an app worth downloading. To get rid of ads and avail of unlimited play time, you can purchase the paid version for $0.99.